Casa Pia Atlético Clube was born in Lisbon more than a hundred years ago, associated with an institution founded in 1780. long and remarkable history in sport and in Portuguese society. He is now celebrating his arrival at the League, which came after joining this past to a present which goes through the very current logic of a partnership, in the case of “Gese”, with a North American investor. This journey that has supported the club on their way to the top flight began less than two years ago and has been a ‘perfect’ courtship which will now culminate in marriage. The image is by Carlos Simões, the director who initiated the connection with the American businessman Robert Platek.

Let’s go back to 2019. At the end of this season, Casa Pia moved up to Ligue II, the first time in professional competitions for the club founded in 1920 by former Casapian students and which had only one presence in Ligue four. -twenty years earlier, in 1938/39. Vítor Franco, president since 2006, led a club in the making. It’s been a turbulent season, with a sports court battle over Rúben Amorim and the current Sporting coach’s lack of qualifications. Despite everything, Casa Pia got up and faced the season in Ligue II, wanting to preserve the identity of an amateur club. But the requirements were different.

The 2019/20 season was difficult for many reasons. When the pandemic paralyzed football, in March 2020, Casa Pia had 11 points from 24 matches. The League of Clubs suspended the championship, giving the classification as final at the time, which meant the relegation of Casa Pia. The club was finally readmitted, after the exclusion of V. Setúbal and D. Aves, but it was at a crossroads.

“We went through great difficulties, both financially and sportingly. We ended the season with 11 points, also due to a lack of knowledge and experience in professional leagues. It is with great difficulty that we have started and finished this season. After the end, there was uncertainty about whether or not we were going to stay in League II”, recalls Carlos Simões, who arrived at the club precisely in 2019, to work in the field of marketing and sponsorship. “We were having difficulties and we had to rent the showcase at a sporting level, this is the most appropriate image.”

“Renting the showcase,” he explains, was about finding “an investor who would help Casa Pia grow and professionalize the sporting aspect.” It was not an easy decision, first of all for Vítor Franco, who has always resisted to the idea of ​​associating the ‘Gese’ with an investor. “The president himself was reluctant to do this. That is precisely why we created this type of company, different from all the others, to see if the relationship was going well and to evaluate it”, explains Carlos Simões: “I kept the briefcase. I had four potential investors. A Portuguese, Brazilians, Colombians and Americans. I’ve been involved in football for 20 years, surveyed the market and talked to friends, explaining what I had was a different business. Because we didn’t want to sell. We wanted, that’s it, to rent the window.

This is where the name Robert Platek comes from. The American businessman is a partner in the MSD group, a private investment company which manages the assets of Michael Dell, the founder of the IT and technology giant Dell. Casa Pia was his first football investment. It’s a private bet from the Platek family, who have since moved on to two other clubs: Denmark’s Sønderjysk Elitesport and Italian Serie A’s Spezia, which the businessman took ownership in February 2021. Soon to expand the portfolio with two other clubs, in other countries.

“The contact went through a good friend, who told me that he had access to an American group that wanted to invest in Portugal”, says Carlos Simões: “It was a chance. We hit the fly. Quite possibly the best investor a club can have, both in terms of sporting ambition and club growth. From there, everything starts to get easier.

The difference in the “social aspect” of Casa Pia

The Casa Pia manager believes it was the club’s history and identity that drew Robert Platek to the project, whose work, through the Dell Foundation and his own family, also has a social component. “What caught their attention was not just football, it was the social aspect, uniting the social aspect with the sporting aspect. When I mentioned Casa Pia, they made the association: the school has a football club. When I told them it was an II League club, they were even more amazed. I explained that it is Casa Pia Atlético Clube, Casa Pia de Lisboa is something else, but we have a signed protocol and a very close relationship. And they sent someone to Portugal to assess it.

The club maintains to this day this formal relationship with Casa Pia in Lisbon, which involves above all Carlos Simões, the access of the institution’s students to the practice of sport. “We have around 400 to 500 athletes in different modalities and they have direct access. As Casa Pia students, they can use it for free. This also happens, he specifies, through partnerships with sponsors who offer, for example, internships to young Casapiens at the end of their training. “When we negotiated sponsorships, more than money, which is not very important at the moment, the question was what we could do to help the children of Casa Pia de Lisboa”, says he: “It really is a different club. We do not represent a district, a city. We represent an institution that is approximately 250 years old. It’s not just a football club.”

Back to the partnership with Robert Platek. It immediately moved forward in preparation for the 2020/21 season, with the appointment of a representative by the investor, Tiago Lopes, the hiring of coach Filipe Martins, who led the team throughout this course, and the constitution of the team, against the clock after, from all the uncertainty of the previous months. The constitution of the SDUQ, a condition for professional competitions, was approved in December 2020 at the club’s general meeting. 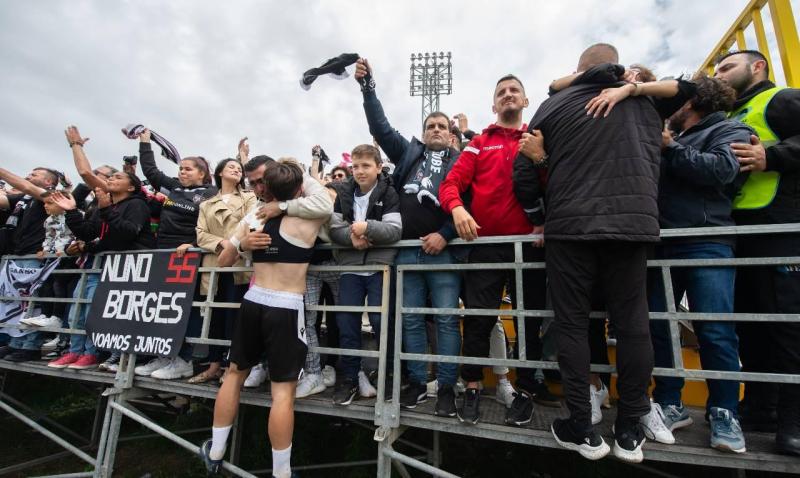 “Ready, after two years, to marry”

The deal initially made with the investor was different from the usual, as Casa Pia was not a SAD, so there was no formal capital acquisition in the first phase. “We created this type of business like no other, I think it was the first in Portugal. We are currently SDUQ, which means that professional football is 100% of the club”, explains Carlos Simões. “We spent many sleepless nights, the president and I, trying to put together a deal that would benefit both parties. It was a perfect marriage. When I went to get the investor, he said to me: ‘We will go out together for three years and then we will see if we are married or not’. We are now ready, after two years, to get married.

“To marry” is to constitute a SAD. “It is obvious that investors at this stage have every right to claim success. The time has come,” says the manager, believing that this step will not change the balance achieved so far: “For the moment, there is only one Casa Pia. There is a president of Casa Pia and an executive director of football, Tiago Lopes, who share the same office. With SAD it will obviously be different in terms of quota distribution, but in terms of execution, it will be the same.

There have been many examples in Portugal of where partnerships between clubs and investors have not gone well. Carlos Simões thinks that with Casa Pia, this risk does not exist. “Casa Pia is a wealthy club. It is reborn from its ashes with this president, who has 15 years in office. It has sufficient income to be able to support the investor, even in growth. SAD will have one percentage and the investor another. The difference I can guarantee will not be large. When the investor came, he didn’t come with that thought. He always came with a positive mindset to grow and elevate the Casa Pia name, not just nationally.

“The first club in this group is called Casa Pia Atlético Clube. At the moment they have two more and with the probability that in a very short period of time they will have two more. This is basically the parent company, that’s where it all started. The investor didn’t come here to sell right away,” he insists: “I don’t know if in 10, or 15, or 20 years, he says to himself: ‘I already have this and that, I’m going to bake a cake and I’m going to sell it.’ money to live.

Robert Platek has yet to visit the club. “In the middle of the pandemic, and since he acquired Spezia in the meantime, he had no opportunity. But it’s for soon, “says Carlos Simões. team, which arrived a year earlier than expected.After finishing the II Liga in ninth place in the 2020/21 season, this year Casa Pia has always been on top and celebrated even in the last round, with the victory 5- 1 at home to Leixões Now at Pina Manique people are still in ‘party mode’ After a season budgeted just under two million euros, decisions regarding 2022/23 will be made in the coming days. 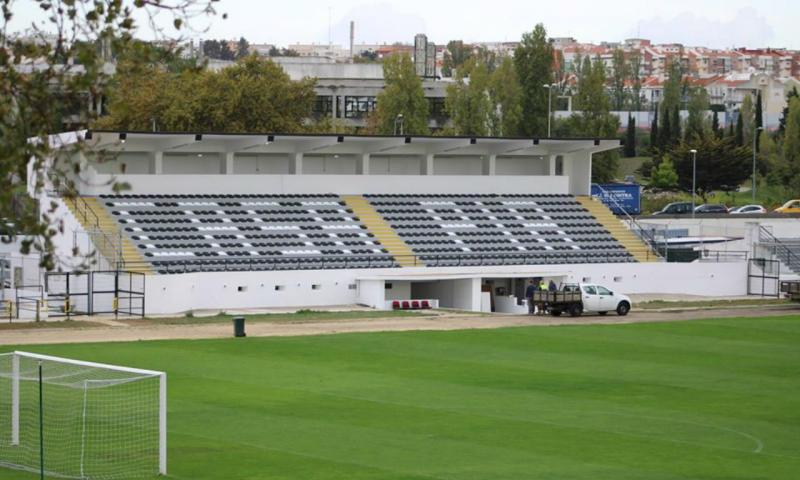 But work is already underway on it. From the start, the stadium works. Before talking to more soccer, Carlos Simões had a technical meeting with the architect to plan the restoration works of the Pina Manique stadium in order to host league matches. “I don’t want time to be our opponent. We will have to leave here, but we wanted to come back as soon as possible,” he says. Casa Pia the season will start at Jamor and the goal is to return to Pina Manique at the end of the year. “I think when the World Cup is over we will go home,” he said.

Casa Pia’s strategy is also to grow in terms of partners. To do this, he will seek to take advantage of history and the “fish” in the extended universe of the ancient Casapians. “Last season we had about 300 or 400 members. Right now there are about a thousand. Our goal is to triple by the end of the season. We are doing something different for the casapians, who are starting to join us,” says Carlos Simões. “We want to capture former students. We have received messages of congratulations from Australia, Luxembourg, Belgium, the USA… Worldwide, we are talking about around 300,000 alumni”, he notes with a smile: “You could almost say that we was the fourth national power.”